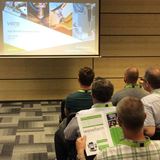 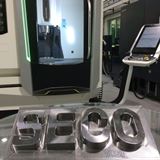 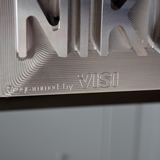 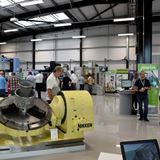 VISI Waveform Increases Metal Removal Rates By Up To 500%

Manufacturers attending VISI’s recent user days at DMG Mori and Nikken, saw how the new Waveform Roughing Strategy in the latest release of the software improves material removal rates by up to 500 percent.

Paul Bown, Seco’s UK Product Manager, says the new tool is ideal for VISI’s waveform roughing strategy. “It’s particularly strong and has a tapered core, along with considerable clearance on the bottom for helical interpolation to get into cuts without the need to drill holes.” The demonstration tool was 8 mm and used the full 20 mm depth of cut, with 20 per cent side engagement, and running at 200 metres a minute.

“This is a 4 flute tool, and we’ve got a 5 flute version coming later in the year along with a 6 flute tool for these strategies on titanium.”

According to John Cockerill, VISI’s UK Support Manager, the new Waveform Roughing Strategy in VISI 2016 R2 increases material removal rates by a minimum of 100 per cent, and up to 500 per cent, compared to conventional toolpaths.

“These strategies utilise the full depth of the tool with smaller step overs, meaning speeds and feeds can be considerably ramped up, giving significant productivity improvements.”

Vero’s ERP/MRP production control system, JAVELIN, was also on display over the three days, along with demonstrations of the Hexagon Romer Arm. Steven Whalley, Hexagon Manufacturing Intelligence Product Specialist, showed how the system laser scans a model to produce a 3D point cloud. “An STL file is produced from that point cloud and imported  into VISI where a surface is created, and the tool paths generated to cut the metal. Without this, you’d have to go in with a hard touch probe and take individual hits, which would take several hours, to do what laser scanning does in minutes.”

Delegate Bob Tunks, Managing Director of BK Tooling Ltd, has been using VISI software for 20 years. “We’re a successful, small high precision plastic injection mould making and moulding company, and we wouldn’t be where we are today without VISI. It makes us more cost efficient by producing better products in a faster time. Many designers go for freeform organic shapes nowadays, and we’ve got to be able to replicate those That can’t be done  with a 2D drawing – we need 3D modeling, and be able to machine directly from those 3D models. So we need good machine tool technology and a really good CAD/CAM package.”

Simon Cockerham is a Design Engineer with Peco Tooling, making small, intricate parts for model railways, using cutters with a diameter often of 0.3 mm and 05 and sometimes down to  just 0.2. “VISI gives us the ability to reliably and consistently perform our job using both the CAD and CAM sides.

“While VISI has reduced the machining times for our highly detailed parts, the software also has tremendous benefits for even the simplest components. It simply takes three clicks to create a cube in VISI: X, Y and Z, and you’ve got a cube. To put a hole through it, again three clicks. Centre of circle, outside of circle, length of circle, and there it is, a hole straight through it.”