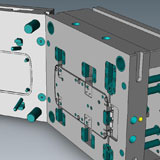 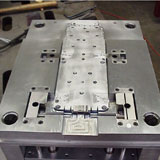 J&M Mold (Fairport Harbour, OH) is a precision tool and die maker for the plastic, aluminium, and zinc injection industries. Owner David Martin is a mechanical engineer who says he has been working in the die casting industry since he was 13 years old. He has been using the full suite of VISI software from Vero International (Wixom, MI) since he opened his operation seven years ago.

He says that he addresses industry challenges by staying in tune with the latest technologies and new strategies for faster, more efficient mould assembly. “For instance, we use VISI Flow software to design accurate moulds faster, and VISI Machining, for cutting steel, and high feed milling. It’s very important that we get the part right the first time. This keeps our customers happy and we enjoy repeat business because of it,” says Martin.

"VISI Flow is as useful to me as the machine used to cut the tool. Running a mould analysis using it helps customers save time and money."

As a student of lean thinking/lean manufacturing, Martin integrates the theories into his use of VISI products. He adds, “It seems that VISI software was designed around lean manufacturing with the constant flow of menu picks – all operations in one software package. VISI is a CAD system that was designed by people with tool makers in mind.”

According to him, designing aluminium moulds versus steel is becoming very popular even though he’s been working with aluminium since he opened up shop. “We use VISI to develop aluminium prototypes and short run production tools. We are able to generate increasingly more parts from them,” notes Martin. As a result, aluminium is beginning to replace P20 steel which has been traditionally used to produce moulds that are 20-32 Rockwell. Aluminium moulds will last for a long time as long as abrasive or corrosive plastics are not injected into them.

“Why build a P20 tool when you can build an aluminium tool that will last through thousands and thousands of shots or short run production?” asks Martin. He cautions, however, that part materials and moulding process must be appropriate for aluminium moulds. “You cannot inject any part into an aluminium mould because of details such as thin-walled shut off designs. Such parts do not work as well in aluminium because the aluminium isn’t as structurally strong as steel.”

However, Martin has found a strategy around that caveat. “We sub-insert steel shut offs or slides inside the aluminium mould design. We call this hybrid aluminium tooling and VISI is strategic for designing such tools. Critical or small parts of the mould design can be made of steel while the rest of the design is aluminium,” Martin says.

Aluminium is less expensive to machine and designing tools in aluminium is less costly for J&M Mould customers. Using VISI, Martin machined a steel plate over two days’ time. Whereas, the same plate designed and machined in aluminium took him just six hours. He says many customers are pleasantly surprised when he tells them he can help them save money by using aluminium versus steel for their mould designs. In addition, delivery of aluminium tools is at least 50 per cent faster depending on the part design compared to steel moulds. “We can generate at least one aluminium tool per week. There is no room for error so we use VISI analysis upfront to assure that the design is accurate the first time,” Martin notes.

Prior to implementing VISI, Martin downloaded several demonstration versions of popular general purpose CAD packages. “None of them compared to VISI’s user interface. Unlike the others, VISI is not parametrically driven so you don’t have to hunt and peck on tree-driven icons. Instead, VISI offers specific tools for specific tasks. For me, that gives me more control over exactly what I am doing.

“Most of my customers who use SolidWorks tell me they have a lot of trouble with tasks such as blending and meshing components. Using VISI, however, there’s no problem or angst over those efforts,” adds Martin.

He likes the VISI machining package, too, particularly the rest milling and pencil milling. Martin explains that he wouldn’t rough out a complex block without those tools. “The important aspects to consider for machining include ease of use, time to program, run time on the CNC, quality of finish, and price. VISI beats the competition on all those issues,” says Al Foote, principal at Compass Technologies, an Ohio-based VISI distributor.

Martin says that using VISI for mould analysis is indispensable. “Customers understand the analyses add value to each and every project. They have come to realize and accept the fact that the cost incurred as a result of running the analysis actually helps them save time and money that can be incurred when moulds that aren’t analyzed must be retooled. VISI Flow is as useful to me as the machine used to cut the tool. “

Recently, a medical device customer approached J&M Mould. A mould that was designed and built in China was producing flawed parts in the field. Over a two day period, Martin used VISI Flow to rework the mould gating system. “Working with the customer and VISI Flow, we found the best gating situation for the part. I moved the gating to where I thought it would be best and used VISI Flow to confirm it. In addition, using VISI Mould we increased the mechanical integrity of the part design and strengthened the areas that needed to be stronger compared to the original Chinese designed mould. We designed and built the tool, shipped it, and as a result the mould generated high quality parts,” says Martin.

Martin taught himself how to use VISI software. He began using VISI 3D machining to produce prototype parts out of plastic. Within one week, he was generating parts. After three months, he was completely competent – designing and building complete tools. Today, he and his staff can build two complex tools per month.

"VISI Flow is as useful to me as the machine used to cut the tool. Running a mould analysis using it helps customers save time and money."