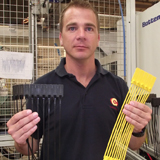 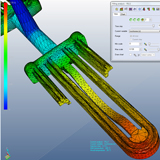 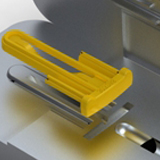 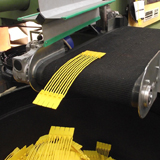 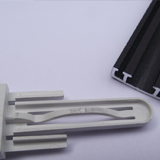 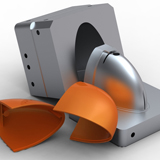 Moulding specialists LGG Charlesworth’s work has been revolutionised by the unique prediction tool VISI Flow, which analyses exactly how a mould will perform ahead of tool manufacture, whether it be a tool made on site, or at a sub contractor.

Providing total moulding solutions for customers across a variety of sectors including aerospace, medical and petro-chemical, Charlesworth manage the entire project. Moulding mainly engineering polymers has steered them towards the technical products end of the market, which generally keeps volumes down. But they also manufacture millions of their own Talisman range of security/anti-tamper products and other high volume items.
.

"Without VISI Flow, moulding issues wouldn't be picked up until the moulding trial, so that saves time & money"

Charlesworth use VISI Flow’s innovative technology from Vero Software, for injection simulation, to show their network of mould making sub contractors exactly how the mould should be manufactured for each project.

This ‘preventative analysis’ detects a wide range of potential manufacturing issues such as warpage, weld lines, air traps, filling aspects and hot spots, while determining the optimum gating position. Technical Director Andrew Bottomley says they generally start using it at the quotation stage, looking at the fill characteristics and cycle times, enabling them to produce accurate costings.
“When the customers place an order we then carry out a full flow analysis to verify feeds and identify any problems with the component design, which are overcome before starting to detail the tooling.” He cites a recent example when VISI Flow highlighted what he describes as a “very, very low wall deviation.” They showed it to the customer, then worked with them to amend the design, ensuring there was no problem when moulding began. “Without VISI Flow it wouldn’t have been picked up until the moulding trial, so that saved time and money immediately.
“Whereas the actual development cycle of an average mould used to take around eight weeks from first sample to full production, with VISI Flow this has been reduced significantly. It means that when our customers get the first moulded product off the tool it’s as near to specification as possible.”
He says it is vital to select the correct tooling company from their network of mould makers across the UK and China, depending on the type of mould needed for the individual job. “But whichever mould maker produces the tooling, they’re all delighted to be given the exact specifications to work to. VISI Flow means we have more control over the tool design, so we’re supporting our toolmakers to a much higher level and taking the burden away from them. They don’t want tools going back for correction, and with VISI Flow we don’t have to send them back.”
It helped LGG Charlesworth create the perfect solution for a tool to mould an aerospace connector block with 32 multiple pitch sensor holes. “The mating parts need to line up with equipment manufactured in America or the Far East, so tolerance levels are extremely tight.
“In order to manufacture something with multiple holes, the moulding reacts very differently compared to general specification shrinkage. A normal shrinkage rate has perhaps 03” to 07” tolerance of shrinkage, but that varies depending on the wall section and any support structures within the moulding. We were able to apply five different shrinkage values in five different areas, and we actually designed the component to have distortion. The component was distorted in a way that when it filled we knew it would be absolutely correct to the drawing. We demonstrated this in VISI Flow to the toolmaker, Paul Moore, of HDM, and he had full confidence that if he made it to our specification, based on what VISI Flow told us, it would be absolutely right.”
Paul Moore would normally expect a project of that complexity to take around 30 weeks, and was delighted when it came in at 16 weeks.
LGG Charlesworth’s Sales Director Steve Kerridge also uses it as a marketing tool. “It improves our standing in the eyes of customers when we show them exactly how their product will be moulded and raise any moulding issues, especially if they provide us with a 3D model and they can see the flow analysis at the quotation stage. They feel they’re much closer to the end product than if they’re just given a price against a drawing.”
The tools used on Charlesworth’s 32 Arburg, Krauss and Battenfeld moulding machines, from 25 tonnes up to 160 tonnes, are made from a range of metals such as aluminium and fully heated tool steels.
VISI Flow’s materials database of 7,500 polymers is particularly useful to Andrew Bottomley, as many of the engineering materials they use are available in it. “Also, the software’s graphical representation is so easy to understand.” Finalising the venting details at the front end of manufacture is also proving invaluable, as Steve Kerridge explains: “Historically, when a mould first goes on the machine you’d need to try at least once to work out where air entrapment occurs. But now, it’s all done on computer, before the mould is made. And it makes corrective actions much more efficient, recently highlighting a flow issue on a part, and proving that an unusual-shaped gate was the best solution – something we didn’t anticipate.”
The filling phase of the analysis provides the same level of control over the injection of molten polymer into the mould cavity as on any injection moulding machine. Moving on to the distortion calculation, the user can visualise and measure the final moulded shape predicted after processing the values for filling, holding and freezing. The thermal module considers all possible thermal effects due to the heat exchange between the molten polymer and the mould inserts with highly conductive materials. Visualisation of cooling-related warpage helps define the best layout to achieve the shortest possible cycle times.
Charlesworth Managing Director Graham Ward says VISI Flow makes an excellent contribution to their technical capabilities, resolving tooling much quicker than before. “It’s extremely intuitive, and its integration with CAD is absolutely seamless.”

"Without VISI Flow, moulding issues wouldn't be picked up until the moulding trial, so that saves time & money"